100% PURE Racing is a company that is focused entirely on bringing expedition adventure racing back to New Zealand. A focus that truly values the contribution of it’s volunteers, sponsors, marshals, landowners, event partners and all the other public and private sector bodies who make such an event feasible. However, our overriding consideration is the competitor experience and our visions and goals are set to ensure we achieve maximum competitor satisfaction from the moment a team enters to the moment they depart the event ceremony. The company is run by Adam Fairmaid, Anna Bastin and Warren Bates who have spent the last two decades immersing themselves in adventure, endurance sports and event management. All three are resident in Queenstown and have a deep passion for the outdoors and the wonderful environment that they live in.

Our Vision and Goals

The modern era of adventure racing was ushered in with the inaugural Raid Gauloises, held in New Zealand, a distant 23 years ago. The last expedition length Southern Traverse was held in 2005 and it has been 11 years since Eco Challenge graced these shores. With gaps like that one could be excused for thinking that the sport had quietly put itself to bed or that other countries were offering something that could no longer be found in the land of the long white cloud. When former World Adventure Racing Champion Warren Bates and past Southern Traverse winner Adam Fairmaid got together to discuss the possibilities, they quickly realised that New Zealand still had all the vital ingredients to make this the pre-eminent adventure racing location on the globe.

The key ingredients in producing a high quality event are the competitors, the location and the delivery. With multisport in New Zealand going from strength to strength, the female scene bursting at the seams with quality athletes and a new wave of school children actively competing, the future looks very bright and competition is extremely healthy. As far as location goes, well, pristine wilderness is something locals might take for granted but overseas teams should welcome the fact that you can step off the plane at an international airport and be immersed in glorious solitude within minutes. Couple that with the inherent variety of terrain and climate and you have the perfect backdrop for interesting and challenging courses.

So, with two of the major ingredients in place, Adam and Warren set about the third dimension of a great race – Delivery. It would be fair to say that both of them have experienced the very best and very worst of race management (and everything in between), in their long adventure racing careers. They’ve lived through the frustrations. They’ve experienced the ‘lows’ when an organiser makes unnecessary errors and the ‘highs’ when an organiser gets it right. It didn’t take much discussion for them both to agree that perfect delivery was something that the event should aspire to achieve. This would mean attention to detail, rigorous management approach to all aspects of the event and the right blend of skills in key personnel.

Adam is a forty five year old company director with an interest in the outdoors. After initially doing a BSc in Psychology at Otago University he went on to complete a Bachelor of Optometry at Auckland University in 1992. The next nine years were spent working as an optometrist firstly in Christchurch then for seven years in his own practices in Queenstown and Invercargill. From 2001 he has been involved in property development with several successful medium size projects completed. In 2009 he became a start-up member of Mount Cook Alpine Salmon Ltd of which he is currently a director.

After an initial sporting diet of rugby and cricket he changed tack and began racing triathlons in 1988. In 1989 came his first Ironman and then embarked on a career in multisport with top ten finishes in the Coast to Coast. The next step was adventure racing where he raced five Southern Traverses, with two wins, and two Eco challenge races.

Outside of this he is an obsessive hunter with most spare time spent in Fiordland National Park or the hills of Otago and Southland. He has climbed Mount Cook and is also a keen surfer and diver.  He married Sarah Clark, who is also a keen adventure racer, in 2006 and daughter Liv was born in 2010.

Warren graduated from University College London with a first class honours degree in Geology. The next 15 years were spent in investment banking in London, the majority of which involved managing a junk bond fund. Sport has been a consistent feature throughout his life and he played representative level cricket and squash as well as captaining the university first XI at football. He was introduced to adventure racing back in 1999 and it quickly became a mild obsession. It was difficult to juggle long working and training hours but somehow he managed to cram it all in, with the help of a very supportive company.

Currently racing for team adidas TERREX he has raced all over the world and XPD Tasmania will be his 7th World Championship appearance. After a career spanning over 25 expedition races, Warren won the Adventure Racing World Championships in 2009.

Warren and his wife Lisa, a native New Zealander, gave up the city life and moved to Queenstown in 2011. They have three children aged under 6; Neve, Cameron and Jess.

Anna has a passion for the great outdoors and endurance based events, and this is reflected in the number of large scale events that she has worked on since moving to Queenstown in 2000. Including 8 Queenstown Winter Festivals, the Inaugural Challenge Wanaka an endurance international triathlon and 3 x Assistant Race Director for ‘Eco Seagate’. A 5 day corporate team building event in which Seagate Technology Corporation brought 200 staff to Queenstown and adopted Adventure Racing as their vehicle for teaching the companies values and missions.

It seems Anna is drawn to any event that is endurance based, work and play. First introduced to Adventure racing and multisport back in 2001, Anna has spent many hours in a support crew role and has also dabbled as a competitor, competing in the Southern Traverse, 24 hr Rogaine World Champs, various 12hr Adventure Races and Rogaines and the odd multisport event.

Any spare time is spent catching up with friends doing some more relaxed paced activities like a round of golf and café orientated rides around the Wakatipu basin. 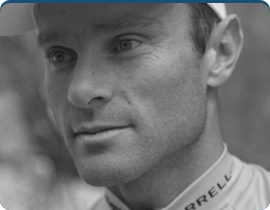 Ian graduated from Otago University with a Masters in Physical Education and a Computer Science Degree. In between lectures and exams he achieved his other goal of competing at the 1990 Commonwealth Games in Auckland as a member of the Elite Men’s Team. After racing the 1990 World Triathlon Champs in the USA he switched over to multisport and won over 30 New Zealand races culminating in winning the Speights Coast to Coast Longest Day in 1995.

His passion for adventure racing started with the Southern Traverse in the early 1990’s and he enjoyed a few wins with Team Cromwell. That lead to racing internationally, with some podium placings, at races such as Eco-Challenge, Eco-Motion Brazil, Bull of Africa, Primal Quest and the World Champs (Sweden, New Foundland, New Zealand, Spain, Brazil – 3rd).

Ian works as a software contractor to the Ministry of Education and is also responsible for the GODzone websites and Live Coverage platform.

He is married to well known Brazilian adventure racer Nora Audra and they live in Christchurch.